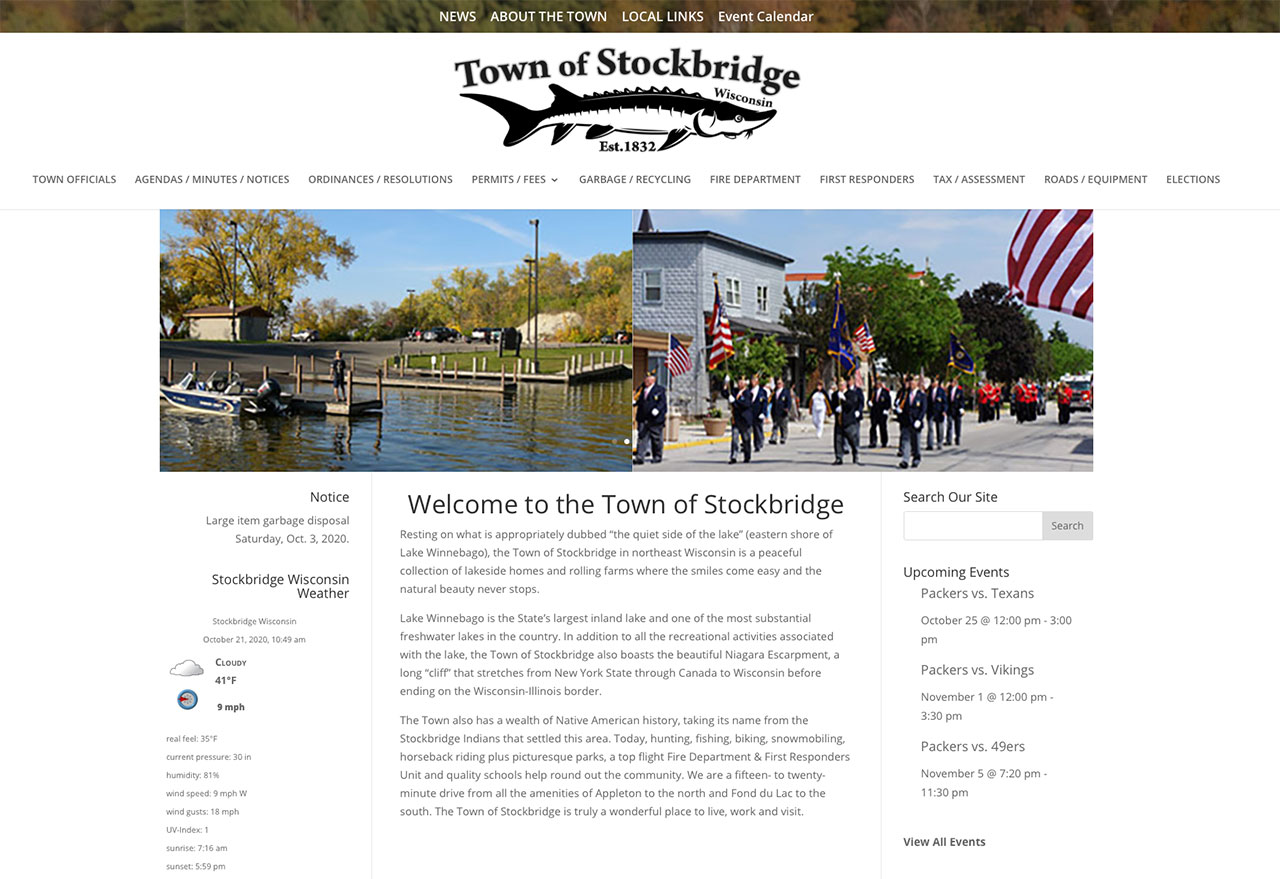 Stockbridge is a village in Calumet County, Wisconsin, United States. Stockbridge is known as “The Sturgeon Center of the World” and was named after the Stockbridge Indians after they moved here from Stockbridge, New York, in the 1830s.

There are two places in Stockbridge listed on the List of Registered Historic Places in Wisconsin: Stockbridge Harbor and Stockbridge Indian Cemetery.

Resting on what is appropriately dubbed “the quiet side of the lake” (eastern shore of Lake Winnebago), the Town of Stockbridge in northeast Wisconsin is a peaceful collection of lakeside homes and rolling farms where the smiles come easy and the natural beauty never stops.

Lake Winnebago is the State’s largest inland lake and one of the most substantial freshwater lakes in the country. In addition to all the recreational activities associated with the lake, the Town of Stockbridge also boasts the beautiful Niagara Escarpment, a long “cliff” that stretches from New York State through Canada to Wisconsin before ending on the Wisconsin-Illinois border.

The Town also has a wealth of Native American history, taking its name from the Stockbridge Indians that settled this area. Today, hunting, fishing, biking, snowmobiling, horseback riding plus picturesque parks, a top flight Fire Department & First Responders Unit and quality schools help round out the community. We are a fifteen- to twenty-minute drive from all the amenities of Appleton to the north and Fond du Lac to the south. The Town of Stockbridge is truly a wonderful place to live, work and visit.

The Stockbridge-Munsee are descended from Algonkian-speaking Indians, primarily Mohicans (also spelled Mahican or Mahikan, but not to be confused with the Mohegan Tribe of Connecticut) and Munsee Delawares, who migrated from New York, Pennsylvania, and New England to Wisconsin in the 1820s and 1830s. The Stockbridge originally lived in western Massachusetts and moved to north-central New York between 1783 and 1786 to form a new Christian community near the Oneida. Pressures from incoming White settlers caused them to consider alternative places to live.

Hendrick Aupaumut, a Stockbridge sachem (leader), realized the tribe needed to leave New York to evade the negative influences of settlers, and he chose to relocate the Stockbridge to Indiana near the Miami tribe. This plan was delayed by the War of 1812, during which Aupaumut served as an intermediary between the United States and Midwestern Indian tribes, the majority of which were allied to the British. Like many Stockbridge, Aupaumut was Christian and believed his tribe’s best chance for survival depended on accepting Euro-American culture rather than resisting it.

Based on his Christian beliefs, Aupaumut rejected the religion of Tecumseh and his brother Tenskwatawa (also known as the Shawnee Prophet), both of whom preached resistance to American expansion and culture. He fought alongside the Americans during the American Revolution, and during the War of 1812 he attempted to convince Midwestern tribes to make peace with the United States. Aupaumut failed in this mission, and the war ended with a United States victory, paving the way for the Stockbridge removal to Indiana.