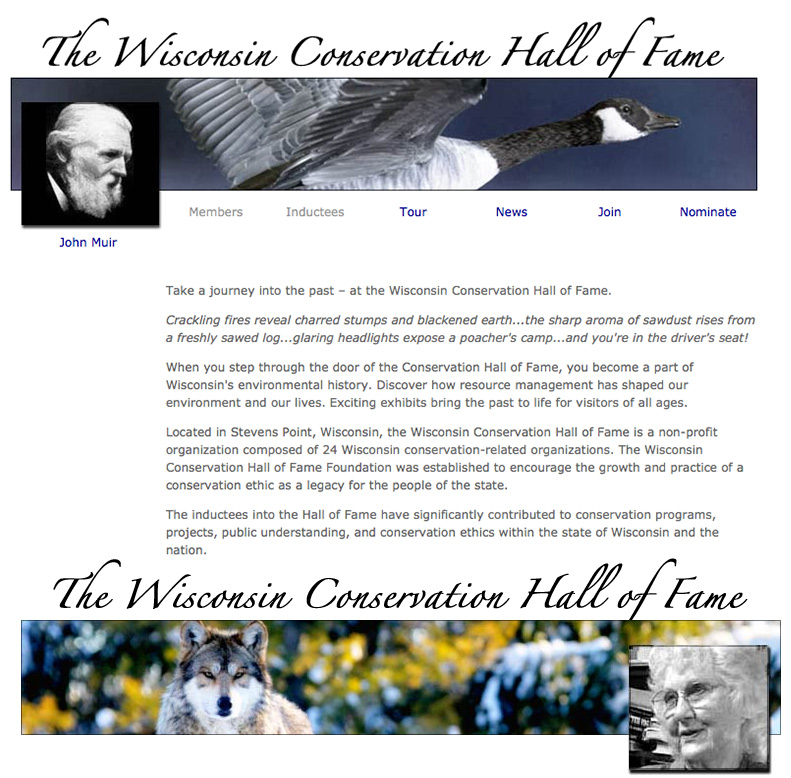 Take a journey into the past – at the Wisconsin Conservation Hall of Fame.

When you step through the door of the Conservation Hall of Fame, you become a part of Wisconsin’s environmental history. Discover how resource management has shaped our environment and our lives. Exciting exhibits bring the past to life for visitors of all ages.

“When we try to pick out anything by itself, we find it hitched to everything else in the Universe.” – Muir

As a boy, John Muir immigrated with his family from Scotland to a Wisconsin farm near Portage. As an explorer, naturalist, author and political activist, he made early conservation history. Muir spent much of his adult life traveling the continent on foot, keeping vivid journals of his wilderness experiences. A founder of the Sierra Club, he played key roles in establishment of Yosemite National Park and other important additions to the national parks and forest systems.

Muir’s childhood days on a farm near Portage helped shape him into the man he would become.
Muir was a conservation icon in America and the world. A naturalist, explorer and writer, he was an influential conservationist, who worked to preserve wilderness areas and wildlife from commercial exploitation and destruction. Muir’s work helped to establish Yosemite National Park and Sequoia National Park, both in California. Many natural sites have been named in his honor, including Muir Woods National Monument, a virgin stand of redwoods, near San Francisco, California.

Muir was born in Scotland in 1838. His family immigrated to the United States when he was 11 years old. Muir attended the University of Wisconsin from 1860 to 1863 but did not graduate. When he left college, he took extensive walking trips to study nature, especially plants. In 1867 he made a walking trip from Indianapolis to the Gulf of Mexico to observe the plants, animals and physical features of the country. During this trip Muir kept extensive journals, which were published after his death as A Thousand Mile Walk to the Gulf.

In 1868 Muir went to Yosemite Valley in California and explored and studied the area for the next six years. He argued forcefully that people should defend species and wilderness areas from devastation by humans. In 1889 he initiated a movement to preserve the sequoias in the Yosemite Valley and the surrounding area. In 1890 his efforts led Congress to establish Yosemite and Sequoia national parks.

In 1892 Muir and some of his supporters founded the Sierra Club, dedicated to the exploration and preservation of American wildlife and wilderness. He also influenced President Theodore Roosevelt to set aside national monuments, national forest reserves, and national parks.

• One of America’s premier conservation figures
• Walked across the continent, keeping a journal of thoughts
• Helped establish Yosemite National Park and Sequoia National Park and other wilderness preserves
• Founded the Sierra Club to preserve wildlife and wilderness

“If suburbia were landscaped with meadows, prairies, thickets or forests, or combinations of these, then the water would sparkle, fish would be good to eat again, birds would sing and human spirits would soar.” – Otto

A nationally recognized speaker and author, Otto influenced the re-establishment of native roadsides in areas of Wisconsin. She planted environmental gardens at local schools. She has worked to control foreign invasive plants and whitetail deer, threats to biodiversity and native vegetation in the Milwaukee area. Thanks to Lorrie Otto, hundreds of schools, businesses and private yards across the country are naturally landscaped. The Schlitz Audubon Center’s annual natural yards tour now bears her name.

Love of nature and the plants and wildlife it supports led Lorrie Otto on a lifetime mission to protect biological diversity and to fight whatever threatened it.

Otto became concerned in the 1960s about the number of dead birds around her property north of Milwaukee. She noticed robins having convulsions. The cause was DDT, which was widely used to control mosquitoes and the pest that causes Dutch elm disease. Otto’s tenacity brought hearings on the pesticide to Wisconsin. She sought and organized scientists, attorneys and witnesses from the United States, Canada and Sweden to present evidence against DDT. It led to a ban, first in Wisconsin in 1970, and nationwide two years later.